The reader is referred to the Company’s Quarterly Report on Form 10-Q for the period ended May 28, 2010, filed on July 12, 2010, for additional information on the Company’s financial results.

Overview
ETC was incorporated in 1969 in Pennsylvania and we operate in two segments: the Training Services Group (TSG) and the Control Systems Group (CSG). Product categories included in TSG are pilot training and tactical flight simulators, disaster management systems and entertainment applications. The CSG segment includes sterilizers, environmental control devices and hyperbaric and hypobaric chambers along with parts and service support. 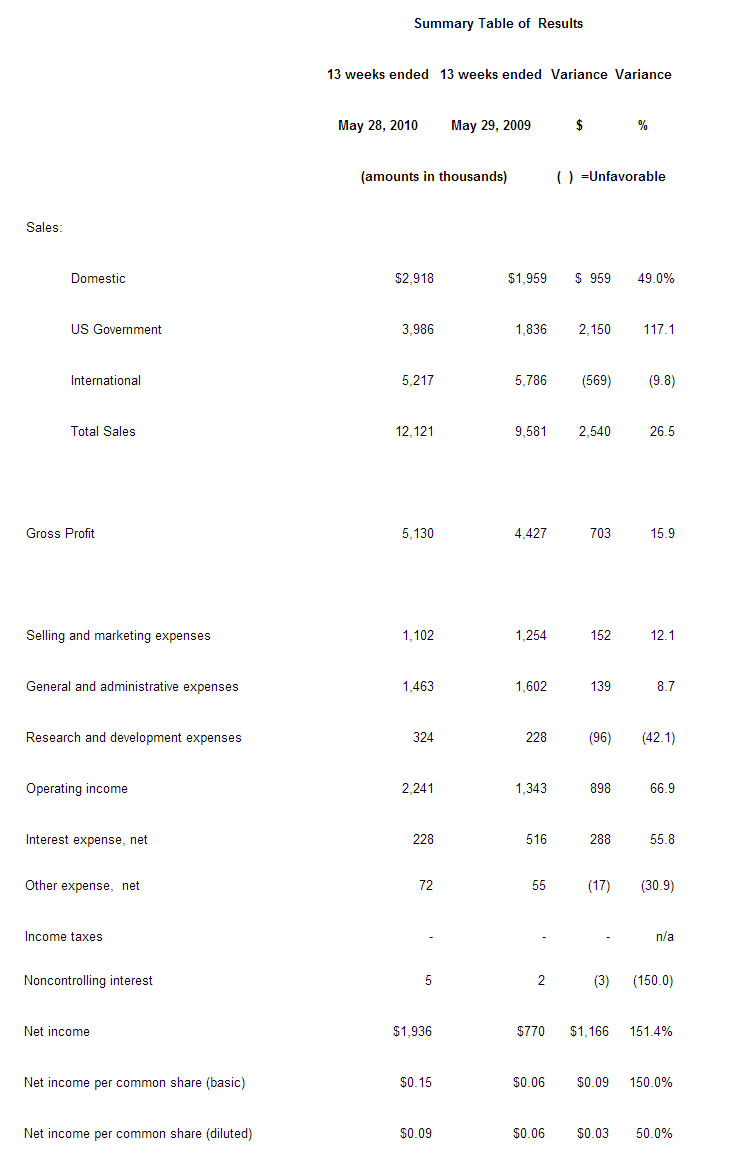 Sales increases in the first quarter of fiscal 2011 were realized in the U.S. Government and Domestic markets offset in part in by a decline in International sales. Increased domestic sales reflected a significant increase in the sterilizer product line (up $1,507,000) of our Control Systems Group, partially offset by declines in most other product areas. U.S. Government sales increased as a result of sales of the Company’s Pilot Training Systems products under significant contracts from the U.S. Navy for a research disorientation trainer and the U.S. Air Force to provide a high performance training and research human centrifuge. International sales reflected lower simulation sales (down $1,048,000) primarily for a contract in the Middle East which was completed in fiscal 2010.

Gross profit for the first quarter of fiscal 2011 increased reflecting the overall sales increase which was partially offset by a 3.9 percentage point reduction in the gross margin rate as a percentage of sales primarily reflecting reductions in the ATS and simulation product areas.

Selling and marketing expenses decreased for the first quarter of fiscal 2011 primarily reflecting reduced bid and proposal expenses and reduced commissions on the mix shift in sales to U.S. Government sales. General and administrative expenses were down on lower spending for legal fees and bad debt expense. Research and development expenses increased as the prior quarter reflected higher grant funds from the Turkish Government. Interest expense reduced on lower bank borrowings and the Company’s July 2009 exchange of a $10 million convertible note for preferred stock. Other expense, net, up slightly, consisted primarily of bank and letter of credit fees as well as foreign currency exchange gains or losses. Due to the utilization of net operating loss carry forwards available the Company did not record an income tax expense on the income in the current fiscal quarter.

Liquidity and Capital Resources
The Company’s liquidity position and borrowing availability improved significantly during the first quarter of 2011. Cash flow from operations was a positive $8,244,000. Working capital (current assets less current liabilities) was $10,940,000 and the Company’s current ratio (current assets divided by current liabilities) was 1.72. The Company repaid over $5 million under its line of credit agreement and repurchased $1,000,000 of Series E Preferred Stock from H.F. Lenfest. The positive cash from operations primarily reflected the net income in the period and milestone payment collections under long term contracts. As of May 28, 2010, we had approximately $21.7 million of borrowing availability under our two lending facilities.

Backlog
Our sales backlog at May 28, 2010 and February 26, 2010, for work to be performed and revenue to be recognized under written agreements after such dates, was $91,928,000 and $96,964,000, respectively. Of the May 28, 2010 sales backlog, approximately $33,014,000 represents one international contract for multiple aircrew training simulators. Approximately 97% of the U.S. Government backlog represents two contracts.

Subsequent to fiscal quarter end, on June 12, 2010, we were awarded an additional $38.3 million contract by the U. S. Air Force to provide a suite of altitude chambers. This contract is not included in the above totals.

Commentary
William F. Mitchell, ETC’s President and Chairman, stated, “This financial report reflects the significant impact of numerous major contracts which were booked in the last 12 months. Awards have been received from the U.S. Navy and Air Force for state-of-the-art simulators and from a long time customer in Southeast Asia for multiple aircrew training simulators. Subsequent to fiscal quarter end, on June 12, 2010, we were awarded an additional $38.3 million contract by the U. S. Air Force to provide a suite of altitude chambers. This contract is not included in the first quarter’s summary.

“The impact of our positive cash flow from operations and availability under our lines cannot be underestimated. Multi-year long-term contracts require significant cash outlays during certain phases of execution. A growing company requires cash to expand its operation. I am very encouraged that ETC is finally benefiting from our many years of product development and engineering innovation.”