Operating Expenses
Operating expenses, including sales and marketing, general and administrative, and research and development, for the 2017 first quarter were $2.9 million, a decrease of $0.3 million, or 8.2%, compared to $3.2 million for the 2016 first quarter. The decrease is due primarily to the on-going effort to reduce non-revenue generating general and administrative expenses.

Cash Flows from Operating, Investing, and Financing Activities
During the 2017 first quarter, as a result of an increase in billings in excess of costs and estimated earnings on uncompleted long-term contracts and an increase in accounts payable, offset in part, by an increase in accounts receivable, the Company generated $0.2 million of cash from operating activities similar to the $0.2 million of cash provided by operating activities during the 2016 first quarter. Under percentage-of-completion (“POC”) revenue recognition, these accounts represent the timing differences of spending on production activities versus the billing and collecting of customer payments.

About ETC
ETC was incorporated in 1969 in Pennsylvania. For over four decades, we have provided our customers with products, service, and support. Innovation, continuous technological improvement and enhancement, and product quality are core values that are critical to our success. We are a significant supplier and innovator in the following areas: (i) software driven products and services used to create and monitor the physiological effects of flight, including high performance jet tactical flight simulation, upset recovery and spatial disorientation, and both suborbital and orbital commercial human spaceflight, collectively, Aircrew Training Systems (“ATS”); (ii) altitude (hypobaric) chambers; (iii) hyperbaric chambers for multiple persons (multiplace chambers); (iv) Advanced Disaster Management Simulators (“ADMS”); (v) steam and gas (ethylene oxide) sterilizers; (vi) environmental testing and simulation devices; and (vii) hyperbaric (100% oxygen) chambers for one person (monoplace chambers).

ETC’s unique ability to offer complete systems, designed and produced to high technical standards, sets it apart from its competition. ETC is headquartered in Southampton, PA. For more information about ETC, visit http://www.etcusa.com/. 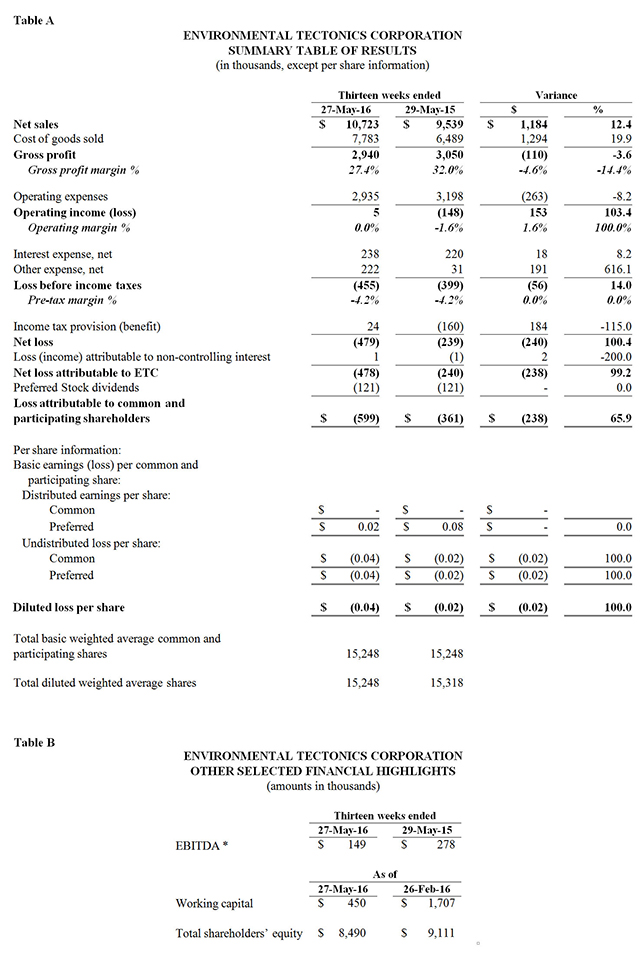 * In addition to disclosing financial results that are determined in accordance with accounting principles generally accepted in the United States of America (“U.S. GAAP”), we also disclose Earnings Before Income Taxes, Depreciation, and Amortization (“EBITDA”). The presentation of a non-U.S. GAAP financial measure such as EBITDA is intended to enhance the usefulness of financial information by providing a measure that management uses internally to evaluate our expenses and operating performance and factors into several of our financial covenant calculations.

A reader may find this item important in evaluating our performance. Management compensates for the limitations of using non-U.S. GAAP financial measures by using them only to supplement our U.S. GAAP results to provide a more complete understanding of the factors and trends affecting our business.